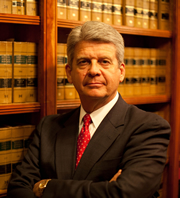 James Thagard, a partner with the firm, was born in Quitman, Georgia on October 12, 1954 and has lived most of his life in the Quitman/Valdosta area.  He attended Valdosta State College (B.A. 1976) and Cumberland School of Law (J.D. 1980).  He was admitted to the Georgia Bar in 1980.  James is an member of the Valdosta (President, 1995) and American Bar Associations; State Bar of Georgia; Defense Research Institute; Georgia Defense Lawyers Association; and Association of Defense Trial Attorneys.

After graduating from law school in 1980 James served as a prosecutor from 1980 to 1985 in the Southern Judicial Circuit which is comprised of five counties surrounding Valdosta.  In 1985 he began a civil practice in Valdosta and has practiced exclusively in the civil arena for over 25 years.  James has tried over 100 jury trials in the state and federal courts of Georgia.  He is a member of the Georgia Supreme Court, Georgia Court Appeals, United States District Court, Middle Division, and the Eleventh Circuit Court of Appeals.  Since going into civil practice he has primarily defended claims involving insurance coverage, motor vehicle accidents, products liability, premises liability, and governmental liability.  James is also involved in the defense of hospitals, doctors, and other professionals.  James enjoys an AV, preeminent peer review rating with Martindale-Hubbell Law Directory.

James Thagard is also a member of the Georgia Defense Lawyers Association.