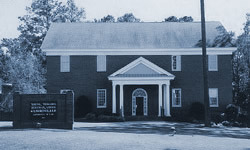 In 1938, Cam U. Young, Jr. joined John B. Odum at his practice on the fifth floor of the Strickland Building in Valdosta, Georgia as an associate lawyer. In 1943, the firm changed its name to Odum & Young and the firm continued its general practice until 1951 when John Odum died. Cam Young continued the firm under the name Odum & Young until 1955.

In 1962, F. Thomas Young, Cam's son, joined the practice and it became known as Young & Young. New fields of practice were tackled and the geographic area in which the firm found itself representing clients expanded as well.

By 1994, when Cam Young retired, the firm had grown to include ten lawyers who regularly practiced throughout all of South Georgia. Tom Young retired in 2001 and since that time, the firm has continued to practice all over South Georgia where it has been a presence for almost seventy-five years, earning a reputation for hard work, diligent representation and excellent advice on behalf of its clients.

The firm was honored in the May 2009 issue of Best's Review where it was recognized as one of only sixty-nine law firms in the United States to have been continuously included in the annual Best's Directory of Recommended Attorneys. This is an honor of which the firm is very proud.